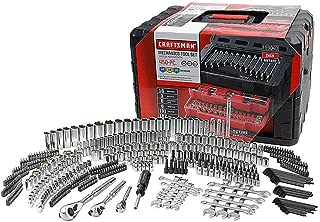 Model # 50450 Ready for Work Make a hard day’s work easier with this 450-piece mechanic’s tool set from Craftsman. From any project as complicated as spending the day under the hood to something as simple as tightening a bolt, you’ll have what you need for the job. This set comes in an array of sizes and measurements that will ensure that you always have what you need on hand.